Got a helping hand from an Animation Production sophomore named, Pennapa Aon Chanwerawong. Here is a link to her DA page.

Almost forgot about this. There are a few important changes in the story and stuff.

To wrap things up here… I’d like to put Tagline, Logline, Synopsis, and Treatment here.

“When ‘Sa’ is alone in the dark, an uninvited guest always crawls out of the darkness … and seek for her.”

Logline:
This is a story of ‘Sa’, who is diagnosed having Achluophobia by a doctor, but Sa knows that what she sees isn’t just her imagination.

Synopsis:
This is a story of ‘Sa’, a woman who is diagnosed having Achluophobia by a doctor, but Sa knows that what she sees isn’t just her imagination. She can see it. She can feel it. It is there in the dark. Others say it’s just an illness of hers and have no idea of what Sa really is resisting against. It always approaches her when she is alone in the dark. Her strong mind won’t last forever, yet it won’t stop at any cost until it achieves its ultimate goal: to be “together forever” with Sa.

Treatment:
Sa got nervous and panic after the power outage affected her well-lit bedroom. She struggled through out the night. On the day after, she went to see the doctor who is taking care of her Achluophobia. The doctor said that she did well so far as this exposure treatment has been proceed. And her final stage for the treatment had arrived – she needed to stay in the room alone for a while without loosing the control over her “fear”.Sa entered the room and sat down as usual. The doctor then turned off the light and shut the door to begin the exposure treatment. He was quite satisfied with the beginning of the process while Sa was calmly sitting alone inside. The fear greets Sa by grabbing her shoulder with one of his hands. Hundreds of hands filled the room’s wall and floor up. Sa is surrounded. She resisted and started to shout. The doctor saw nothing but Sa talking alone in the room. He tried to calm her down, but it was unsuccessful. Sa began to get physical with hands of the fear, but she stands no chance of winning. Those hands overwhelm her and pin her back on the chair. The fear’s head showed up and laughed at her. It said that today is what it has been waiting for a very long time. It smirked. Then come closer and closer. The doctor decided to abort this operation. Sa screamed. The doctor got off this observation desk and enters the room. Those corruption images in the room vaporized after them got touched by the light from the opening door. The doctor walked in and calmed Sa down and told her to redo this operation next time. Sa promised to get it done next time. The doctor offered his hand to pull Sa up, but she refused and asked him to go out of the room first. The doctor then left. Sa smirked just like the fear and said that there’s nothing to fear any more. She laughed in her throat.
END

It’s been a while since the last time I have come to college.
On the last Friday, I pitched some concept ideas, and I got this one approved.

“It’s a story about ‘Sa’, who tries to overcome her phobias with a therapist’s aid, but she realizes that no one could save her.”

Now I’m writing a proper screen script and storyboard for the next presentation.

Finally, got back to this blog!

I just finished my 3rd year work reel (some leisure-time work are included).

I’d suggest to watch the HD version on Vimeo.

To sum it up:
After a trimester that I have been through, I learnt that simulating things in 3D is NOT easy at all. It requires a lot of efforts and understanding. Observing the real life will help a lot, but knowing how to achieve such an effect also matters. Creating convincing CGI isn’t the hardest part of the production process just yet. Blending them into the real world is even harder than make them believable because there will be REAL objects to compare with them side-by-side. Principle of animation is essential for the fine tuning stage due to the fact that it gives more ‘alive’ looking to the CGI.

In this trimester, I had a chance to go on a real shooting for compositing. I quite like it more than pure CG animation. I’d say it’s more “magical” when it comes to the final result. It’s a mixture of film and animation which I’ll be going forward to. Also, I’m applying for compositing jobs in my internship. I’ve learnt some basic skills from this study, which will help me with my thesis in post production.

I rendered only the layer that contains reflective monoliths, which have the moving red cloth within their reflection.

In this shot, I have 2 layers of Monoliths: 1 in white and the other one in black. 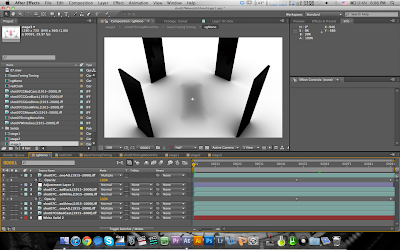 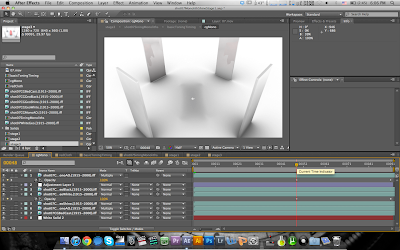 Then I blend the two together by adjusting the opacity. Also, I add a flare effect to make them shine. 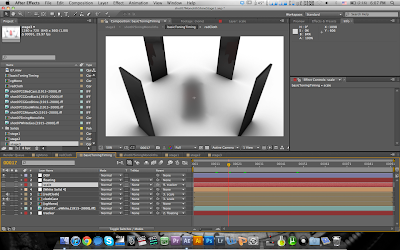 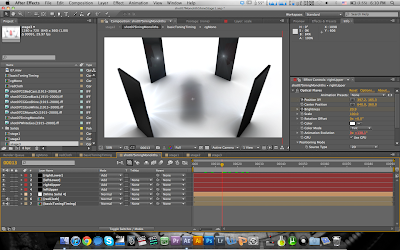 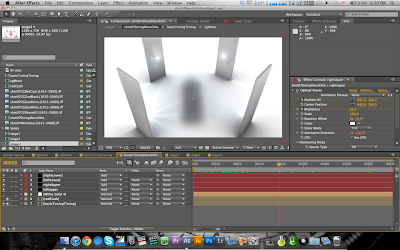 The bed footage got keyed out the red, and then it was used as an inverted luma track for another footage layer. That causes the rest of the footage to disappear, so now we have a floating red bed. 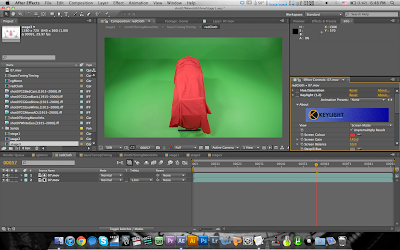 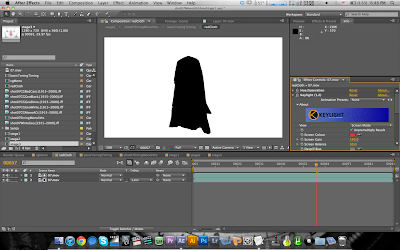 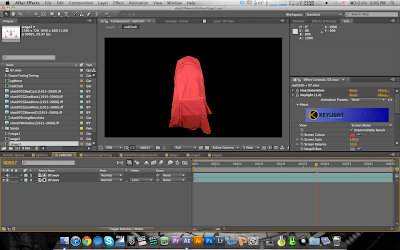 Tracking the marker on the CG footage is a way to go. The movements of the ‘Null Object’ will be identical with the reference layer. With some helping hands from Pin Constraint tool, the perspective will be controlled and adjusted accordingly to the reference layer as well. 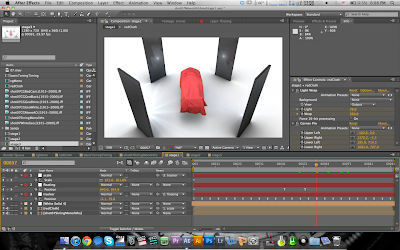 Putting the bed layer on top of the CG background will completely hide the marker on the floor of the CG layer. Adding another null object containing the position data to make it feels floaty.

To make a shadow of the bed, duplicate the bed layer, crush all the color detail to black, decrease the opacity down a bit accordingly to the distance from the bed to the ground, tweak the perspective,  and put the layer beneath the bed layer. putting fast blur effect over radial blur effect will do the tricks.

So, I’ve got a real footage of a red cloth on a green screen. 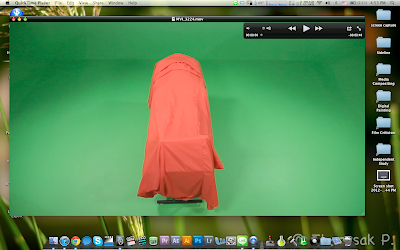 next up, I precisely match the camera view of the CG one with the one used in the footage. 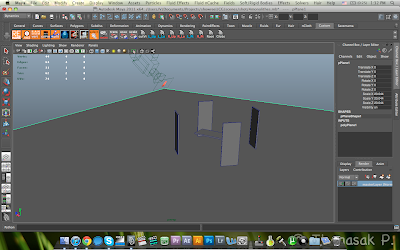 Add a “polyPlane” on top of the model 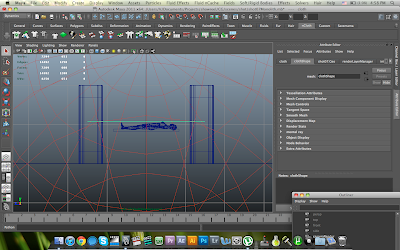 Make sure that it has a reasonable amount of sub division. 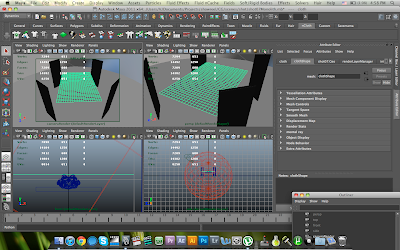 Then try assign the plane to be an nCloth object.

Don’t forget to create nCache to record the nCloth calculation for the better performance of Maya.

with nCache attached to the object, you’d bear in mind that you may NOT make any changes on the nCloth object because it will lead to fetal error. 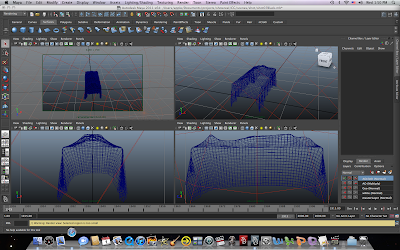 To get more sense of dimension from the CG work, adding AO (Acoustic Occlusion) is a wise choice. 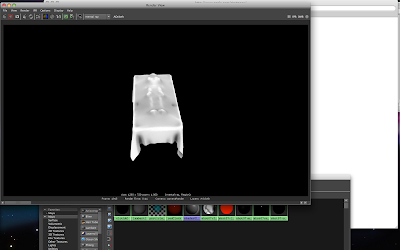 “Sample” in AO setting defines the neatness of the shadow areas, but it requires more time tremendously. 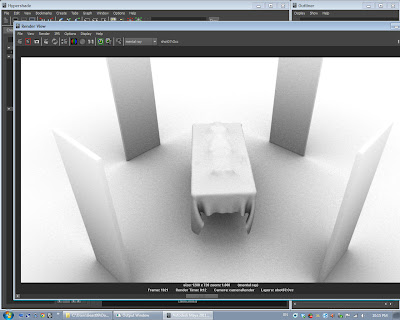 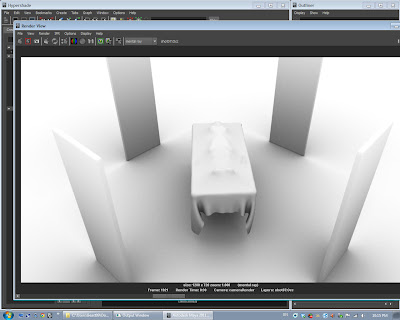 Sometimes, the extra details does’nt worth the extended render time. 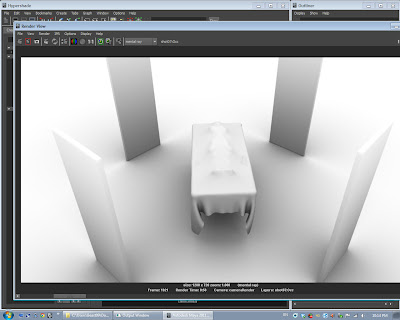 With some rendered passes. 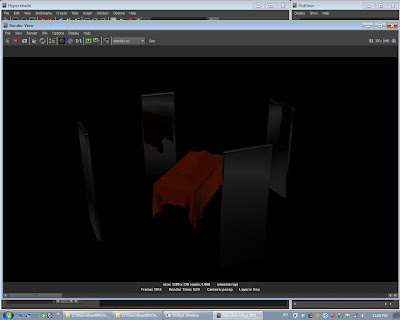 Rigid body is applied to the ball and bricks without applying gravity.

This time with gravity added to the bricks

You can see that not only bricks don’t fly off when they get hit, but they also fall apart as they are stacked improperly. Also, this adds weight to bricks, so they can stop the ball, which hit a relatively low area where is densely stacked by higher bricks.

As a result, I changed the point of the constrain to give the ball more destructive power.

It’s not that different, but there’s still a little bit more impact power than the previous one.

After some experiments with constraining an object and wait for the momentum to work out, I decide to “cheat” with my old friend, Mr. Keyframe.

The ball’s still a bit too slow…

This time, I turned the visibility of the ball geometry off.

Now it looks kind of like an explosion breaking the wall, eh?

[Week02’s Note]
This is a sample introduction video of Houdini on YouTube that I found.
I will try to make one as awesome as one of these sample works, hopefully.